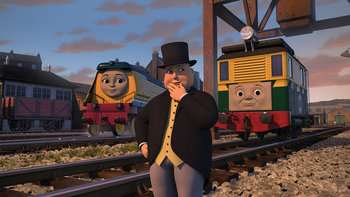 Fed up with the other engines pushing him around, Philip refuses to give way when he and James end up facing each other on a one-track bridge. As James refuses too, it's stalemate. But with engines stacked up behind them and the bridge in danger of collapsing, Philip decides that sometimes the littlest engine can actually be the bigger engine!