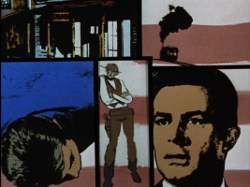 West and Gordon ensure that the Crown Jewels of Herzburg arrive safely at the Denver museum where they are to be exhibited, only for them to disappear almost immediately from a locked room. The agents become suspicious of Axel Morgan (John Doucette), a wealthy rancher, when Gordon notices that a painting which Morgan donated to the exhibit is a forgery. It soon emerges that Morgan is in collusion with Dr. Loveless. This time the mad genius has invented a way of entering and leaving paintings via the use of sound waves. He's also sent for master gunslinger for Lightnin’ McCoy (John Alonzo), whom he plans to employ in a showdown with West.