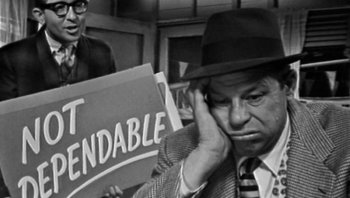 Hunnicut feels the burden of truth.
Rod Serling: This, as the banner already has proclaimed, is Mr. Harvey Hunnicut, an expert on commerce and con jobs, a brash, bright, and larceny-loaded wheeler and dealer who, when the good Lord passed out a conscience, must have gone for a beer and missed out. And these are a couple of other characters in our story: a little old man and a Model A car - but not just any old man and not just any Model A. There's something very special about the both of them. As a matter of fact, in just a few moments, they'll give Harvey Hunnicut something that he's never experienced before. Through the good offices of a little magic, they will unload on Mr. Hunnicut the absolute necessity to tell the truth. Exactly where they come from is conjecture, but as to where they're heading for, this we know, because all of them - and you - are on the threshold of the Twilight Zone.
Advertisement:

Harvey Hunnicut, a used car salesman (Jack Carson), buys a car that forces him to tell the truth.

Rod Serling: Couldn't happen, you say? Far-fetched? Way-out? Tilt-off-center? Possible. But the next time you buy an automobile, if it happens to look as if it had just gone through the Battle of the Marne, and the seller is ready to throw into the bargain one of his arms, be particularly careful in explaining to the boss about your grandmother's funeral, when you are actually at Chavez Ravine watching the Dodgers. It'll be a fact that you are the proud possessor of an instrument of truth - manufactured and distributed by an exclusive dealer - in the Twilight Zone.