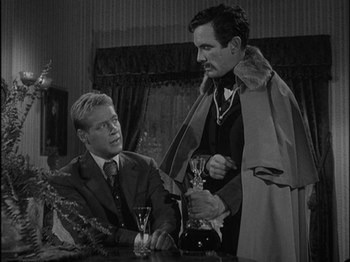 The Professor makes an unfortunate acquaintance.
Rod Serling: Witness a theoretical argument, Washington, D.C., the present. Four intelligent men talking about an improbable thing like going back in time. A friendly debate revolving around a simple issue: could a human being change what has happened before? Interesting and theoretical, because who ever heard of a man going back in time? Before tonight, that is, because this is the Twilight Zone.

Peter Corrigan (Russell Johnson) is spending a quiet evening at a Washington, DC gentlemen's club, playing bridge and chatting with his friends. The topic of the conversation is time travel. When one of his buddies speculates on the possibility of traveling back into the past, Peter insists on the principle of Ontological Inertia, namely that you can't go back and change the past because if you changed it, it wouldn't have happened that way for you to change.

In any event, Peter bids his friends goodbye, bumping into a club attendant named William on the way out. Peter steps outside, everything goes fuzzy...and Peter suddenly finds himself in 1865. And not just any day, but April 14, 1865. Suddenly, Peter knows what he must do: get over to Ford's Theater and prevent the assassination of Abraham Lincoln.

Rod Serling: Mr. Peter Corrigan, lately returned from a place 'back there', a journey into time with highly questionable results, proving on one hand that the threads of history are woven tightly, and the skein of events cannot be undone, but on the other hand, there are small fragments of tapestry that can be altered. Tonight's thesis to be taken, as you will - in the Twilight Zone.