Recap / Tangled: The Series S2E02 "The Return Of Quaid" 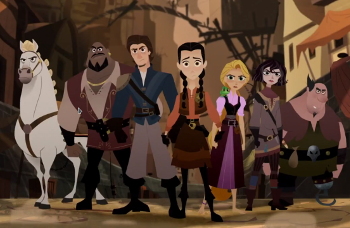 The people need someone they can trust. Someone who can offer a long-term solution, someone they look up to.
— Rapunzel
Advertisement:

Rapunzel and her friends are still in Vardaros, which is now in danger of being taken over by other bad guys after the Baron was defeated in the last episode. Rapunzel wants to help the people of Vardaros get a good leader, and when she hears of the legend of Quaid—who was once a loyal and brave leader of Vardaros but disappeared—she's determined to find him.