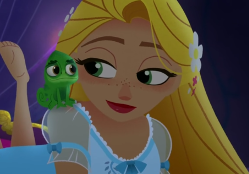 Nobody could ever take your place in my heart. Or on my shoulder!
—Rapunzel, to Pascal
Advertisement:

Rapunzel's royal responsibilities, and her relationship with Eugene, take up so much of her time, that she's spending less time with Pascal, who begins to feel neglected and like he does not fit into Rapunzel's new life. After Rapunzel stands him up for a dinner, and a misunderstanding makes Pascal think Rapunzel doesn't feel he's her best friend anymore, Pascal runs away—to Rapunzel's tower. Rapunzel, Eugene and Cassandra go to the tower as well. Meanwhile, a snake is hunting Pascal, and we learn about a sad part of Pascal's past and how he met Rapunzel.