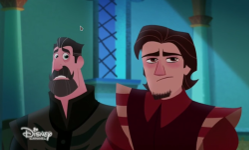 It's basically "entertainment for morons".
— Cassandra, explaining the concept of "pranks" to Rapunzel.
Advertisement:

In order to prank a rival monarch, King Frederic recruits Eugene to help him pull off a scheme. Eugene's former experience as a thief comes in handy when they break into the other monarch's castle at King Frederic's request. Eugene actually is doing this to increase his father-in-law(-to-be)'s opinion of him, but King Frederic is oblivious to that. Meanwhile, Rapunzel learns the meaning of the word "pranked" and then gets a little too enthusiastically into doing that herself.