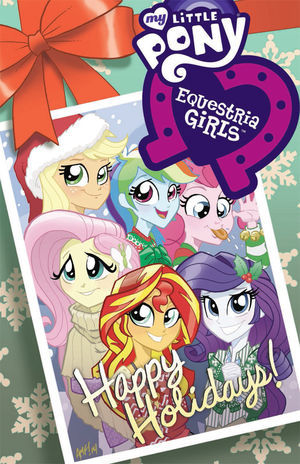 Yeah, don't get used to those happy faces.

As the holidays approach at Canterlot High, Sunset is reminded that she is far too distant from her family. AJ hatches a plan with the rest of her friends to help warm Sunset up with a series of slumber parties. The first one at Pinkie's goes fine, until AJ gets a call from Apple Bloom to check in on AJ for Granny, calling her by her childhood nickname "Piggly Wiggly" when hanging up. AJ is embarrassed by the nickname but gladly explains it to their friends. As they drift to sleep, Sunset writes to Twilight Sparkle via her book explaining how their friends are helping out.

The next day at school, AJ is shocked to find that some person going by "Anon-a-Miss" has posted about AJ's "Piggly Wiggly" name to a social media site, and the school is already teasing her. They think nothing of it until after the next slumber party at Rarity's, where a bunch of candid photos of the friends dressing in some of Rarity's spare clothes get sent out by Anon-a-Miss the next day. The others all suspect that Sunset is the one responsible for this, as she was the only other person at these events. Sunset finds her friends and the whole school suddenly against her, even as more secrets of other students from the school get publicized by Anon-a-Miss. Even the more mischievous students of the school like Trixie would like to take credit for Anon-a-Miss but they can't.

Sunset writes back to Twilight and asks for her help. Twilight recounts the situation sounds similar to the legend of the Windegos that attempt to foster hatred between friends, and reminds her the importance of family. As she shows this dialog to her friends the next day, the mention of "family" leads the group to realize who Anon-a-Miss might be, just as Apple Bloom, Sweetie Belle, and Scootaloo appear and admit to being Anon-a-Miss, started as a joke by Apple Bloom to get back at AJ having fun at the slumber parties but soon got out of hand. With their identity known, they quickly delete the Anon-a-Miss profile, and the school soon forgets about the incident, and Sunset's friends apologize to her for doubting her. The group meets up for a final holiday get-together, making sure Sunset is fully welcoming into their group.