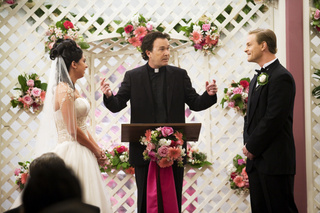 Nate is the worst priest ever.
"Let's go rob Mickey Moscone, a guy who kills people, and lives in our city."
—Nate

The episode opens in an Italian restaurant. The owner, Ray Palermo, tells his wife to go home while he takes care of the last two customers — a pair of mobsters having a business meeting. She begs him to kick them out or leave, saying they can't be trusted. Ray says he'll handle it. Not long after she leaves, one mobster guns down the other. This is Nicky Moscone, who says because he gave Ray the money to start the restaurant, he owes Moscone a favor. To repay it, Ray is going to take the fall for the murder.

Five years later, his wife comes to the Leverage team to try and get her husband out. Nate isn't too happy about it, but the woman is a friend of Sophie's and so he listens. The mob boss promised to take care of her family, but he never paid a dime. All she wants is the restaurant back.

As they canvas the estate, they notice an FBI surveillance van nearby, and Nate decides to borrow theirs. Parker and Hardison show up dressed in suits, and pass themselves off as agents. Parker lifts an ID off one of them and makes a copy of it. Hardison helps himself to the computer.

At the FBI building, Eliot comes in to take the files off the computer, but finds they’ve been recorded on cassettes. Hardison sets off the fire alarm and Eliot uses the disturbance to escape. After listening to tapes for hours, Hardison finally finds out Moscone keeps his money in an offshore accounts in the Caimans, in his wife's name, with constantly rotating passwords he can change at any time. There is some cash, but it's on the estate. They listen to a conversation between Moscone and his wife as she demands help setting up their daughter’s wedding. Nate sees that as their in.

Sophie arrives there as a wedding planner, with the rest of the team as her help.

Nate gets roped into having a drink with Moscone and his future son-in-law. After the boy leaves, Moscone admits that he offered thousands if the boy walks away, but he refused. Moscone says he has yet to meet a man without a price. Then a call comes in. Hardison listens to the audio of it, and finds out Moscone is doing a deal at the wedding, which means they have to get the money out from under his nose, while running the wedding, without ruining the wedding of this very nice girl and her equally innocent groom.

The wedding day arrives and Parker gets dressed in a bridesmaid dress, which she says in an all-access pass at a wedding. Hardison sets up as a DJ and brings his surveillance network. The guests arrive, including The Butcher.

Eliot: Does he have the lamb chops?
Hardison: The Butcher of Kiev.

He and Eliot have some history, and he is definitely going to remember Eliot. Their cover is in danger, but Sophie declares she intends to stay, by herself if necessary. Nate tells Parker and Hardison to find the money and Eliot to stay away from the Butcher. He has a wedding ceremony to officiate.

As Nate goes a little off script, Parker breaks into the screening room, the last place the money could be, and finds a case. Once the bride and groom become man and wife, Moscone leaves, which means the deal is going down. Parker hasn’t gotten into the case by the time Moscone arrives, and she hurriedly hides behind the curtains. He opens the case to find it empty. Someone got to the money before them. Nate looks around and settles on Moscone’s wife, Heather (Nicole Sullivan).

Moscone’s partner is not happy and threatening to kill everyone there. He also reveals that the man Moscone shot was his brother. Nate orders Eliot to the screening room, but he runs into the Butcher. As Moscone desperately tries to talk the Russian down, Parker emerges from her hiding place acting a little tipsy, and claims everyone has been looking for him, and calls out “He’s in here!” while dragging him out of the room. Parker manages to get Moscone into the wedding tent, and to keep him there, Hardison starts up the father-daughter dance.

The Butcher recognizes Eliot, who manages to take him out with a whisk and a slice of lemon. Hardison hurriedly sends the bride and groom off. Nate comes up to talk to the Russian. Sophie goes to talk to Heather, and Nate tells Moscone she left. The gangster realizes Heather is taking off with his money, and hurriedly calls the bank to change the passwords to his accounts. Thanks to Hardison's bugs, the team gets the codes and access to all his money. Hardison leaves him five dollars for socks.

With the money from Moscone, the team buys the restaurant and sets it up for the family. The family gets even more good news: Moscone is arrested and Ray is coming home (thanks to Hardison's bug planted onto Parker's for the FBI to hear the murder confession). They celebrate with Eliot's cooking.

Tropes stolen in this Job: