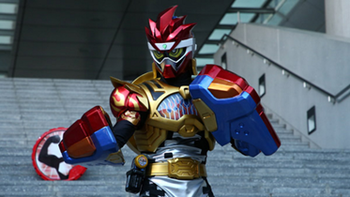 The Episode begins at CR. Poppy is in a panic due to the events of the last Episode, but Emu re-assures her that the patient comes first. The two soon find that the operating room has been redecorated into a second home for Nico, who recoils with utter disgust at Emu's attempts to inquire. Poppy remembers that Emu is a source of stress for her and kicks him out of the room. Meanwhile, Hiiro tells his father of Emu's game disease; only to be summoned by Emu, whom he meets up on the roof. As Hiiro leaves, Taiga comes up to the Director.

On the rooftop, Emu asks Hiiro why he attacked him, coming to the conclusion that Hiiro recognized Emu as a source of Nico's stress and reacted. Hiiro denies this, yet refuses to come clean; faking the old grudges he had against Emu earlier on to keep up the lie. Hiiro transforms into Brave level 1 in another attempt to operate, but is interrupted by the Revol Bugster and an army of Viruses as the combatants are stage-selected elsewhere. Emu has a realizaton concerning Nico's stress, but is intercepted by Genm Zombie Gamer as he attempts to leave. Meanwhile, Taiga has strong-armed the Director into getting access to CR, aiming to whisk away with Nico Saiba. Back at the combat site, the Viruses are destroyed, but Genm uses Critical Dead to knock Brave and Ex-Aid out of their transformation. The evil Rider seizes Hiiro's Gashats., and goes for Emu's. However, a burst of anger from Emu activates his dormant Bugster infection, making him physically strong enough (in his un-henshined civillian form!) to directly attack Genm. Genm readies himself to retaliate, but Parado arrives and the two villains flee. Emu goes off to tend to Nico, promising to retrieve Hiiro's Gashats as well.

Taiga has taken Nico back to his clinic, where, once Emu and Asuna arrive, they find out the reason why Nico hates Emu: A Flashback Sequence shows that Emu won against Nico in a gaming tournament six years prior. This was her first loss in an otherwise perfect winning streak. (Taiga states that she is now a gaming celebrity earning millions of dollars) Offended by the drama that Nico has caused over something so silly, Asuna calls her hatred "shallow." Nico hasn't given up her grudge though, and wants to become a Kamen Rider herself to beat Emu. This infuriates Taiga immensely, who explains that this isn't just a game and that they are risking their lives to battle the Bugster. Nico runs off with Asuna pursuing her. Meanwhile, Taiga challenges Emu to a fight.

Outside, Emu explains to Taiga that the Bugster is protecting him because he is Nico's source of stress. Taiga, with visible hesitation, says that Nico had nothing to do with his decision to Fight Emu, and he transforms into Kamen Rider Snipe. The Revol Bugster, Parado , and Kuroto Dan all arrive to battle the other Riders. Everyone transforms and begins fighting each other, Snipe transformng into Drago Knight Hunter Z Full Dragon and Ex-Aid into Double Action Gamer XX. Genm advances on Ex-Aid, but Para-DX breaks up the battle and wants Ex-Aid all for himself. Genm instead begins fighting the under-levelled Snipe. Asuna brings Nico Saiba to the battlefield to watch the carnage in the hopes of educating her, putting special emphasis on Snipe's hopeless battle against Zombie Gamer. Nico, in an act of recklessness, grabs a mop and attempts to attack Genm.....with predictable results.

As the Revol Bugster hates the fact that the battle is an all-out brawl, it sees Kamen Rider Para-DX attacking Ex-Aid (Nico's stress-source) and ends up attackng it's superior due to it's programming. Para-DX bitterly chuckles at the stupidity of "an NPC" and despite Genm's objections, destroys it with a Knockout Fighter Critical Strike, it's data being absorbed into Genm's Bugvisor. Satisfied, the villains leave. Emu then has another head-ache from his infection. Nico, having not given up on her hatred of Emu leaves with Taiga after trying and failing to get him to antagonize him some more.

As they leave, Asuna laments on how Nico was the first patient Emu couldn't make smile.