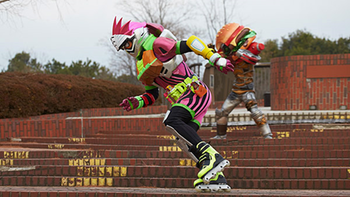 Emu is taking a break from being on the CR's call, playing video games at a burger cafe. Something then tries taking his burger away. He recognizes the entity as a Bugster and alerts CR, chasing the thing down. He pursues it to a parking lot, where he meets a man claiming that the Bugster is harmless. Taiga and Nico arrive on-scene, seeing the monster as a threat. Taiga becomes Kamen Rider Snipe and attacks it immediately as the patient begs Emu and Asuna to protect the Bugster. Parado appears on-scene and, realizing that Snipe and Ex-Aid outnumber the Bugster, transforms into Kamen Rider Para-DX Puzzle Gammer Level 50 to turn the fight into a two-on-two. Emu transforms into Ex-Aid and responds while Snipe attacks the Bugster. Para-DX finds it weird that Emu isn't using the Mighty Brothers XX Gashat.....which Emu reveals he left at the office along with his other Gashats since it was his day off. As Pallad laments that this fight isn't a proper one, the patient again begs Emu to protect the Bugster, even giving him a new Gashat, which Pallad notices is Level 4. Noticing that the Bugster is running from Snipe instead of fighting back, Emu agrees and uses the new Gashat to become Burger Action Gamer Level 4. With his ketchup and mustard guns, he fires the condiments at Snipe, who fires back in response. Pallad leaves the scene, his role done. Snipe is soon disabled and flees alongside Nico. The patient's body reacts to his stress, prompting them to return to CR.

Back at CR, The patient is named Tsukuru Koboshi, a worker at Genm Corp. After introducing the Bugster as Burgmon, he reveals that he made the Ju Ju Burger Gashat in an attempt to save the company, which has fallen under during Kuroto's absence. As he was toying around with the game data, he discovered that the data housed the Bugster Virus, which infected him. This birthed Burgmon. Tsukuru befriended the Bugster immediately; who kept him healthy enough to complete the Gashat, which was completed as leverage should he have needed a justification for going to CR. Emu tries to remind Koboshi that Burgmon is killing him, but the man seems not to care....though Burgmon does. Tsukuru reassures Burgmon that he sees him like a son, and doesn't want him to leave. This leads into a skit in which Poppy Pipopapo and Burgmon make a burger together.

The two explain the situation to Director Kagami later on as Hiiro arrives and joins them. He notices Burgmon and has to be held back by the Director and Emu before he attacks it. He calls Bugsters "Humanity's enemy," which offends Poppy into telling him off, telling Hiiro that "not all Bugsters are evil." Burgmon however takes the comment to heart, noting that "enemies have to be defeated eventually."

At their hideout, Parado and Kuroto discuss the Ju Ju Burger Gashat, which Kuroto states was made from a Level 4 game that was scrapped from the development lineup since Genm Corp. was under-staffed at the time. Parado reminds Kuroto that someone other than him made a game, which Kuroto plans on "reclaiming." Back at CR, Emu tells Tsukuru that Burgmon has vanished. Poppy bursts into the operating room, saying that a message has been left in pickles. The trio decode the message, which translates roughly to "Tsukuru, get help." Somewhere outdoors, Burgmon has cornered a couple and plans to "make them into toppings." Snipe arrives, attacking Burgmon immediately; who doesn't even fight back. Ex-Aid arrives, and soon realizes that Burgmon was pretending to be evil so the Riders could dispatch him and cure Tsukuru. Burgmon tries one more time to seem menacing. Ex-Aid calls his bluff, transforming into Burger Action Gamer Level 4 once more.

Burgmon fires toppings at him, which Snipe shoots down; only to be interrupted by Ex-Aid, who explains that Ju Ju Burger isn't a conflict game. Ex-Aid fires his ketchup/mustard guns at the toppings Burgmon sends out. After handling the toppings, Ex-Aid activates the Ju Ju Burger Critical Strike, which results in him.....making Burgmon a burger. Burgmon loves the burger so much that his happiness ends up removing Tsukuru's game disease. He and Burgmon have an emotionally-happy hug. Then, someone off-screen activates Stage Select. It's Kuroto and Parado, who make their intent on seizing the Ju Ju Burger Gashat known. Tsukuru expresses joy at seeing his boss again, only to look on in horror as he transforms into Zombie Gamer. Snipe attacks Genm immediately while Ex-Aid advances on Kamen Rider Para-DX. (Tsukuru, Poppy and Burgmon observe from the sidelines) The battle is depressingly brief, resulting in both Snipe and Ex-Aid disabled.

Para-DX takes the Ju Ju Burger Gashat and gets ready to leave....only for Genm to activate Critical Dead. His digital zombie horde advances on Tsukuru and Burgmon. Burgmon pushes his friend out of the way, fighting valiantly aganst the horde. He is soon overtaken and damaged. He looks back at Tsukuru, and, with his final words begs Tsukuru to keep "making games full of dreams." He is then destroyed, which irritates Emu so much that he has another pain from his infection. Para-DX is uncharactertically silent as he flees with Genm.

At the hideout, he asks Kuroto why destroying Burgmon was necessary, as they already had the Gashat they needed. Kuroto again states that he refuses to allow games that he didn't create exist. Parado tells him to delete the Gashat dats then. Kuroto responds that while he did't make the game, he is the one that thought of it. He then tells Parado not to lump Gashats and Bugsters together.

Kuroto then begins adding the Ju Ju Burger data to Kamen Rider Chronicle while Parado stares at him coldly. The Episode then ends.