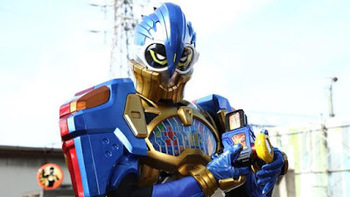 Taiga's discovered that Emu has Game Disease and tries to learn more about his condition, while having to still deal with a frustrating Nico, who threatens to live with him in his hospital until he relents and beats up Emu. Taiga refuses, with Nico deciding to take matters into her own hands when she finds his Driver and Gashats left alone.

Meanwhile, Poppy, Hiiro, and Emu are back at the hospital, with Hiiro complimenting him for his achievements, but not before telling him that surgery isn't best for him due to his recent anemic attack. They then get a distress call for a patient with Game Disease, only to find Nico there, perfectly unharmed with Taiga's equipment. Wanting to beat up Emu and ignoring Taiga's warnings, Nico uses the Driver and Gashat, only for the transformation to fail and end up infecting her with the Bugster Virus. To make matters worse, her use of the Bang Bang Shooting Gashat spawns a Level 5 Revol Bugster, who's immune to any of Ex-Aid's attacks due to Nico's hatred of Emu. Gemn then shows up to collect data on Mighty Brothers XX, managing to get it after being defeated by Ex-Aid Level XX and leaving.

Taiga then meets up with Kuroto, who reveals that not only does Emu have Game Disease, he's actually Patient Zero, who was first given the virus by Zaizen Michiko 6 years before to give birth to the Bugsters. Unfortunately, it failed and Zaizen's entire team was instantly enveloped by the virus, disappearing without any sort of trace.

Meanwhile, back at the CR, Nico is taken in to recover, but refuses to get better, remembering Emu from a tournament from several years ago, despite him not remembering her. Emu is then questioned by Hiiro on why he became a doctor in the first place, with Emu revealing that it wasn't after Hinata saved his life; it was after a gaming tournament when he passed out and received a vision of the surgery he received as a child (Actually Zaizen's team operating on him, unbeknownst to Emu), that he decided to take a break from video games and focus on his medical exams. Taiga then calls the CR to have Nico's stuff taken, seemingly because all it's doing is annoying him.

Meanwhile, in Kuroto's hideout, he and Parado have a talk about the upcoming game: Kamen Rider Chronicle. After analyzing the Mighty Brothers XX form, Kuroto reveals a gift to Parado : his new Gashat Gear Dual that will allow him to become a Rider far more powerful than the others as practice for his planned game.

As soon as Emu and Asuna arrive, it's revealed to be a trap; Taiga immediately transforms into Snipe and beats up Emu, with Hiiro joining soon after. Refusing to explain his reasons, Brave helps Snipe, with Revol coming to join the fight...only for Parado to keep him suspended in the air with a chain so Parad can deal with the riders himself. Snipe then steals the Drago Knight Hunter Z Gashat, both him and Brave using it to fight Ex-Aid, which is soon interrupted by Parado , telling them to back down, as Emu does not want to fight. Pulling out his new Gashat, Parad transforms into Kamen Rider Para-DX Level 50, happily beating Snipe and Brave up mercilessly and without any sort of effort as Puzzle Gamer. When Ex-Aid joins the fight in his Level 3 form, Para-DX transforms into his Fighter Gamer form, defeating Emu with just as much effort. He then leaves, asking Emu to have fun with him next time, with Emu's symptoms getting worse; rather than succumbing to headaches after detransforming from Level XX, he's received the side effects when using his normal powers as well. As Emu is taken back to CR, it's revealed that Hiiro's helping Taiga fight Emu because of the danger he possesses as a carrier of the virus, and the amount of stress Emu would go through if he found out.