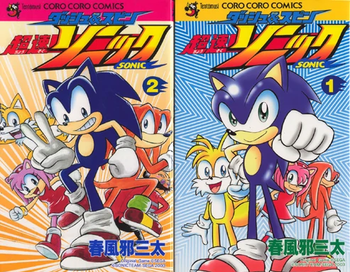 Trust us, this is about as normal as it gets.
Dash & Spin: Super Fast Sonic was a manga series written and illustrated by Santa Harukaze, and initially published in Extra CoroCoro Comics Special in the early 2000s in Japan. It is a Denser and Wackier In Name Only take on the Sonic the Hedgehog series.
Advertisement:

The series would eventually be published in two volumes in July 2003 and February 2005; both releases are now out of print, however volume 1 was briefly re-released for free in 2020 to commemorate the release of the live-action movie.