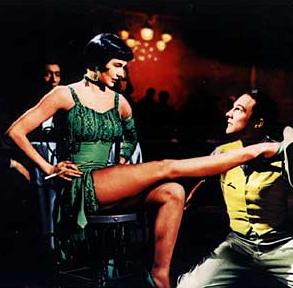 Cyd Charisse had legs that go all the way up.
"She's got legs, an' knows how to use them
She never begs, she knows how to choose 'em
She's holdin' leg, wonderin' how to feel them
Would you get behind 'em, if you could only find 'em?"
— ZZ Top, "Legs"
Advertisement:

There are many things about a woman that can catch the camera's eye. Some shows may focus on her ample chest; others, her curvy behind; and others still like to take a really long look at how lovely her legs are.

This trope deals with cases where a female character's legs are given special attention, either by the camera or by characters in-universe. This is notably recurrent in G-rated fiction, where the Male Gaze is directed to the legs rather than the even more sexualized breasts and buttocks. Gender-inverted versions are rare, and tend to be Played for Laughs when they do occur.

Often takes the form of a Feet-First Introduction that slowly pans up the legs in question. May also be seen in conjunction with a Sexy Walk. Zettai Ryouiki, Showgirl Skirt, Dangerously Short Skirt, Underwear/Leotards/Mini Dresses Of Power, Qipao, Who Wears Short Shorts? and Footsie Under the Table are also good ways to show off these features. A Kick Chick will almost always have these, as will most female Dance Battlers. The Statuesque Stunner will also have these, more often than not. Bath Kick and Foot Popping are used to show these off as well. If the Amazonian Beauty has them, expect either the narration, other characters, or the character design to emphasize her legs' muscularity as attractive, often with special attention to the thighs.

Closely related to Fanservice. Show Some Leg is not necessarily related, but certainly can be.

One can only imagine how he'd react to a centipede girl.

One can only imagine how he'd react to a centipede girl.