Kill 'Em All
aka: Kill Them All 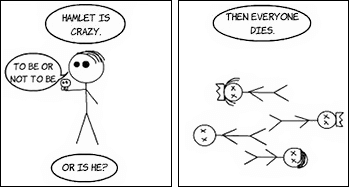 "A slaughterhouse, eight corpses all told"- The Player
"Deaths for all ages and occasions. Deaths of kings and princes...and nobodies."
"The bad end unhappily, the good, unluckily."
— The Player, Rosencrantz and Guildenstern Are Dead
Advertisement:

When Anyone Can Die becomes "Everyone Will Die".

Many series are noteworthy for the extremely high body count among the main cast that they rack up in their last few episodes. In some cases, all of the heroes make a Heroic Sacrifice, or otherwise find themselves wearing the Red Shirt. Occasionally, the protagonists simply fail to prevent The End of the World as We Know It, resulting in a Downer Ending. (Possibly Dying Alone to cap it all.)

Compare Everybody's Dead, Dave, where everybody except the main characters are dead. If just one person survives, it's Sole Survivor or Final Girl. Compare the Climactic Battle Resurrection. Also compare the Bolivian Army Ending, only we actually see the attack of the Bolivian Army. Also see Dwindling Party, where the cast is killed off one by one from the start. When a Sudden Downer Ending is planned from the start, it usually happens this way.

Usually, however, either they accomplish something in death, such as killing the Big Bad and thus preventing The Bad Guy Wins, or it becomes clear that likeable as they may be, the world is better off without them, or their deaths are clearly an escape from a Fate Worse than Death. If none of these happens, and they prove completely ineffectual in both life and death, it's a Shoot the Shaggy Dog ending.

In a Prequel, they may be Doomed by Canon: all characters who do not appear in the sequel and can not be disposed of otherwise will have to die.

In Tabletop Games, this is called a Total Party Kill. Game Masters who are really annoyed with their group (or just sadistic) may invoke Rocks Fall, Everyone Dies.

In Videogames, this trope can take the form of a Self-Imposed Challenge; The "Genocide" Run, which is where you kill everyone and everything in your path without stopping for questions. This, of course, only works where NPC's do not respawn.

A short historical digression: the words "Caedite eos, novit enim Dominus qui sunt eius" (Latin: "Kill them all, for God knows which are his," popularly rendered as "Kill 'em all, and let God sort 'em out.") are attributed

to Abbot Arnold Amaury before the massacre of Béziers during the Albigensian Crusade — albeit not in any of the numerous contemporary accounts of it. This was only attributed to him twenty years later as something he "reportedly" said.

The Trope Namer is Yoshiyuki Tomino, the Gundam creator who was given the nickname "Kill 'Em All Tomino" because of his reputation for producing anime where he kills off a large number of characters, often due to bouts of depression in his own life.

The funny thing about this particular trope, however, is that knowing that everyone dies is somehow much less spoiler-ish than knowing that, say, only your favorite one does. The wonders of perception...as some guy once allegedly said, "The death of one man is a tragedy; the death of millions is a statistic."

See also Suicide Mission, Gotta Kill Em All, Final Solution, and Omnicidal Maniac (for whom "killing 'em all" is his goal). For Real Life examples, please see Would Be Rude to Say "Genocide" instead. Contrast Everybody Lives.

Not to be confused with the 2012 martial-arts movie Kill 'Em All or Metallica's debut album.

Note: This is a Spoilered Rotten trope, that means that EVERY SINGLE EXAMPLE on this list is a spoiler by default and will be unmarked. This is your last warning, only proceed if you really believe you can handle this list.

After the alien has already killed the entire family, there is one ending where if you use the Electrified Bathtub strategy on the alien, it gets fried, but then uses its tongue to decapitate the remaining survivor as a Last Breath Bullet before dying.

Alternative Title(s): Kill Them All

After the alien has already killed the entire family, there is one ending where if you use the Electrified Bathtub strategy on the alien, it gets fried, but then uses its tongue to decapitate the remaining survivor as a Last Breath Bullet before dying.