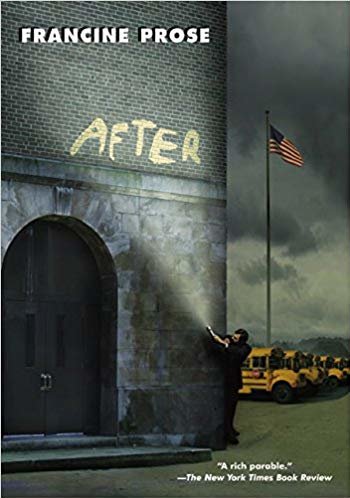 "School has become a prison. No one knows why. There's no way to stop it."
—The back cover

After is a Young Adult Literature novel written by Francine Prose.

Tom is a sophomore at Central High, one of the “smart jocks”, a normal guy at a normal school. And during math class, that normalcy shatters. A school the next town over is shot up by angry students, and in the wake of this tragedy, school at Central begins to change. A grief and crisis counselor, Dr Willner, takes over, instituting new rules at every turn. Metal detectors, random searches, a ban on things like chewing gum, hats, even the color red. At first the students make their compromises, but when those who do not comply begin to vanish, Tom realizes that nothing good can come of sacrificing freedom for safety.

Not to be confused with After by Anna Todd, another YA novel with the same title.