Despite being several seasons of dark, death-filled events, there are some Heartwarming Moments, some of them doubling as the characters' Moment of Awesome. 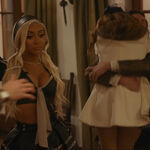