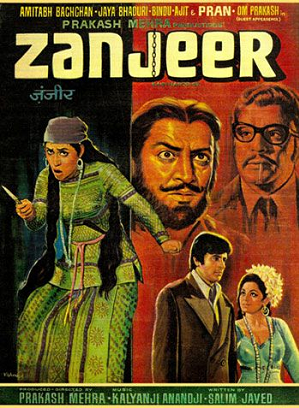 Zanjeer (Chain) is the first in a long line of Bollywood action/crime movies casting Amitabh Bachchan as, basically, a Clint Eastwood analogue. Orphaned when his criminal father attempted to go straight and was killed (along with the wife/mother of the family) by his old employers, Amitabh's character is adopted by a kindly policeman and grows up to be a policeman himself, tangling with a powerful bootlegger, who also happens to be the one who killed his family, although Amitabh doesn't know that at first. Costarred Amitabh's real life wife Jaya Bhaduri as his love interest. A remake - well, a trilogy of remakes in Hindi and Southern Indian languages - is in the works recently, but is struggling with legal issues.