Film / Winnetou I
aka: Apache Gold 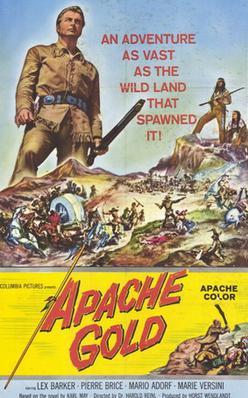 Apache Gold, aka Winnetou, 1st part (1963) is a film adaptation based on novels by Karl May. It was directed by Harald Reinl, starring Lex Barker as Old Shatterhand, Pierre Brice as Winnetou and Mario Adorf as Frederick Santer. It is the second film of the series, but chronologically it's a Prequel to The Treasure of Silver Lake.

The tribe of the Apaches possesses a big hoard of gold. The first scene of the movie shows Winnetou, son of the chief, handing a sack of gold to a young Indian, who is supposed to deliver it. Santer, villain of the story, tries to get the information out of the Indian guy. Unsuccessfully, because one of his Mooks shoots the Indian when he spits in Santer's face.

The Apaches have one more problem to deal with; the railroad company is building right through their land, but they can't risk a clash, because a war would probably wipe them out.

Meanwhile a young German engineer who has the nickname 'Old Shatterhand' is escorting a trek of covered wagons with firearms and firewater, both very sought after by the Indians. Shortly before the same attack, three westmen warn them. Sam Hawkens is explaining to Shatterhand that, although he has a very nice gun, he is still a very green Greenhorn. We learn soon after that Shatterhand is anything but a greenhorn, in the following Chase Scene he proves he is a true badass.

Shatterhand and his trek reach the town, where Santer is the most important man and also the one who altered the plans for the railroad, so he could win some hundred thousand dollar for himself. Shatterhand visits him because he is employed by the Great Western Company to check on why the route is changed.

Soon after that he meets Winnetou for the first time and the rest of the film is him fighting Indians, becoming friend with Indians, falling in love with Nscho-Tschi ('Beautiful Day'), Winnetou's sister and several gunfights, in which people participate who let themselves be shot conveniently easily.