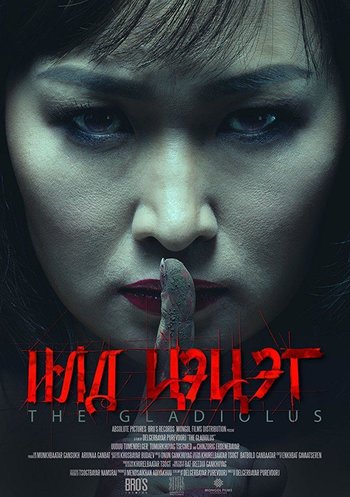 The Gladiolus is a 2017 film from Mongolia, directed by Delgerbayar Purevdorj.

Khongorzul is a schoolteacher and principal of maybe 40 years of age, and she has some problems. Her husband recently left her for a younger woman. Her little son Jargal has suffered some sort of injury or illness that has left him in a wheelchair, and he is undergoing grueling physical therapy in order to re-learn how to walk. And if that isn't enough, her 19-year-old daughter Tsetseg is having an affair with Tugsuu, a drug dealer 10 years her senior.

That last leads to bigger problems. Khongorzul goes to Tugsuu's apartment to return her daughter's keys, but she sees an argument between Tugsuu, Tsetseg, and another woman that leads to all of them stalking off. Key in hand, Khongorzul yields to temptation and enters Tugsuu's apartment. He catches her there, and tries to rape her, but she grabs a handy candlestick and bashes his head in with it. Now she has a bigger problem. Khongorzul stuffs Tugsuu's body into a large suitcase, drives out of Ulaanbaatar into the countryside, digs a grave, and buries Tugsuu and his suitcase under a tree.

Enter Lt. Dandar, a detective with the Ulaanbaatar police department. Dandar's life isn't exactly perfect either. He is nearing retirement, and generally burned out on police work. His oldest son, who followed his footsteps into the police, was killed in the line of duty. And his wife has left him. Dandar, investigating his last case, faces a crisis of conscience when he uncovers the truth about Khongorzul.