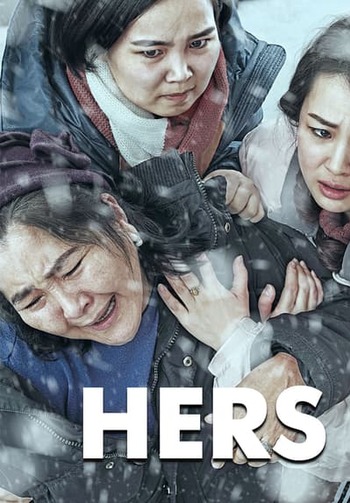 Hers is a 2017 film from Mongolia directed by Galbayar Dashkhuu.

The film centers around a fifty-something woman who is never named. Many years ago her family was more prosperous, but a long time ago her husband lost all the family's money in a bank collapse and they were ruined. The husband disappeared. For some 15 years the woman and her two daughters have been eking out a precarious existence operating in, and living in, a corner kiosk the size of a medium van. Daughters Barchimeg and Ariunaa sleep together in a narrow cot while Mom sleeps behind the counter, in a kiosk without running water or heat in the brutal Mongolian winters.

This meager living is destroyed when, without warning, and in fact while the three women are still inside the kiosk, it is lifted onto a tow truck and hauled off to a junkyard. Living in the kiosk was bad enough but now Mom, Barchimeg, and Ariunaa are left homeless, sleeping in a train station. Mom begins pestering the halls of government, demanding the return of her kiosk. When that doesn't work, she begins holding vigil at the front door of the Mayor of Ulaanbaatar's personal residence.