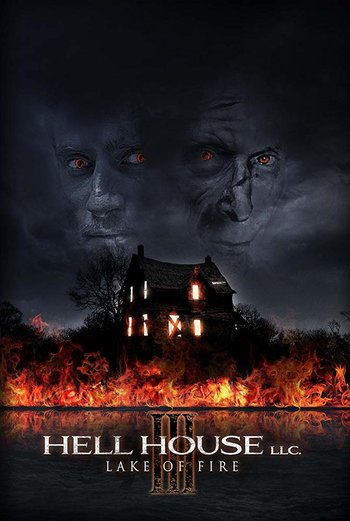 He's coming and you're all going to Hell.
Advertisement:

Hell House LLC III: The Lake of Fire is an indie Found Footage horror film from the Hell House LLC franchise, written and directed by Stephen Cognetti. A year after Jessica Fox's investigative team went missing in the Abaddon Hotel the infamous landmark is about to be demolished when media mogul Russel Wynn buys the property and converts it into the set for his interactive theater show ''Insomnia''. He invites newly hired Morning Mysteries reporter Vanessa Shepherd to film everything in the run-up to opening night, even encouraging the cast and crew of Insomnia to carry cameras provided by her at all times and film everything going on behind the scenes. The eerie sightings captured on tape by the crew only raise further questions about Wynn's entire venture as the fateful day approaches.

Hell House LLC III: The Lake of Fire was released as a Shudder exclusive on September 19th, 2019 and is the final film entry in the series.