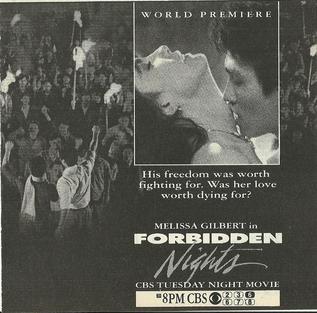 "His freedom was worth fighting for. Was her love worth dying for?"
Advertisement:

Forbidden Nights is a 1990 American made-for-television drama film directed by Waris Hussein and based on the article The Rocky Course of Love in China written by Judith Shapiro. The film was shot in Hong Kong and stars Melissa Gilbert, Robin Shou and Victor K. Wong. The film also marked the American debut of Shou, who wouldn't act in another American film until Mortal Kombat in 1995.

Set in Red China in 1979, the film focuses on Judith Shapiro (Melissa Gilbert), an American teacher who falls in love with Liang Heng (Robin Shou), a Chinese radical, trying to bring political reform to his homeland. She puts all her wishes and dreams away to fit into his ideals, but soon, trouble starts to come.

The TV Film had VHS copies released to the public, but no other medium releases. However, the Full Movie is up on Youtube to watch