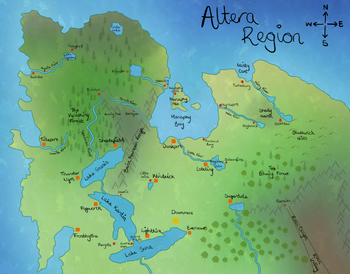 A general map of Altera, created by Theo-Sev

is a Pokémon fanfic written by LacePendragon set in the original region of Altera, which seems to be based on Scotland and Canada, and takes place in an alternate universe after the events of some of the games.

The story follows Jude Farr, an autistic, non-binary, sixteen-year-old who has no interest in being a trainer, but goes on a journey, regardless, to get away from their close-minded, small town. Jude plans on a relaxing travel in their year as a trainer, but their plans are changed as violent Pokemon attacks begin to sweep the region and it becomes clear that a mystery is afoot.

Can also be read on Fanfiction.Net

, though it should be noted that supplementary information, such as a map and worldbuilding facts, are only available on Archive of Our Own's version.