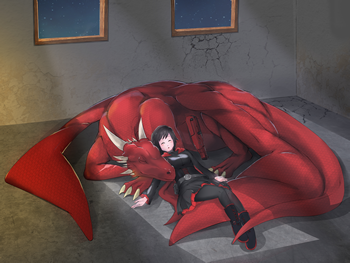 A Rose's Scales is a Crossover Fanfic between RWBY and Inheritance Cycle by pokeman1280.

Ruby finds a red stone in the middle of the Emerald Forest, only it's not a stone. Now in addition to her studies at Beacon Academy, she must learn what it means to be a Rider in a world where she is the first. Her life will never be the same.

The story is complete, with 48 chapters. The fanfic can be found here.

The Sequel, Reversal began with its first chapter posted on Oct 4, 2016. Is now complete, with 51 chapters. It can be read here

A Prequel, Nevermore began with its first chapter posted on Sep 12, 2017. Is now complete, with 13 chapters. It can be read here

A Threequel, Reconstruction began with its first chapter posted on Dec 12, 2017. It is Ongoing. It can be read here