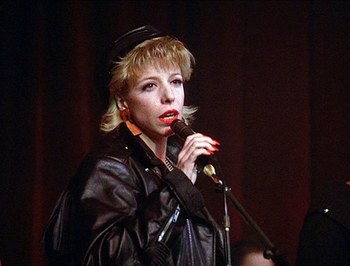 Julee A. Cruise (born December 1, 1956) is a notable Dream Pop/Jazz/New Age artist who's done much work on David Lynch's movies. She is known for her distinctive, airy vocals.

She got her start after playing French horn at college and performed as a singer and actress in Minneapolis. She joined a short project that worked on Janis Joplin covers and she also worked as a talent scout for a time.

She got her big break in 1985 by doing vocals for the David Lynch film Blue Velvet with the song "Mysteries of Love". Used after Lynch's attempt to use This Mortal Coil's Cover Version of "Song to the Siren" was thwarted by licensing costs, the song became a prominent part of the film and gained attention to Cruise's abilities. This led to the Blue Velvet's composer, Angelo Badalamenti, writing more songs for her to perform for future films. The resulting recordings ended up on her 1989 critically acclaimed album Floating Into The Night.

After this she started working with Lynch again for the music in his series, Twin Peaks, this time using a song from her album, "Falling" for the series. The song won her a Grammy for Best Pop Instrumental and Cruise had really started to make a name for herself. Around this time Cruise also toured with The B-52s while Cindy Wilson took a leave of absence from the band.

After working on more soundtrack songs, Cruise grew interested in writing and composing songs for herself. The resulting album, The Voice Of Love was released in 1992 once again to critical acclaim.

She spent the next few years working on soundtracks and taking breaks before going solo once again in 2002 titled The Art Of Being A Girl. Although not as acclaimed as her other work, it was strongly received and even met some pretty good sales. She has since done some work acting and did some work as a backing vocalist for bands in Electronic Music.

It should also be noted that she was one of 3 major Dream Pop solo artists, including Lisa Germano and Heidi Berry. Compared to the former's Alternative Rock nature and the latter's Folk Rock nature, Cruise takes her music from more New Age and Jazz influences. Additionally, Cruise hasn't been somehow associated with the 4AD Records label. (Both Germano and Berry were signed to it in The '90s; Berry also contributed to This Mortal Coil's last album.)

Troping into the night: