Characters / Asterix
aka: Asterix Versus Caesar

The characters found in the comic book series Asterix. Characters with a Dub Name Change have their original French name in the parentheses next to their English version name. 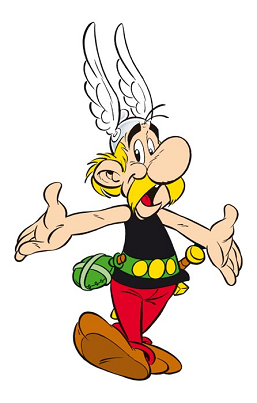 The main character of the series, Asterix got into various adventures with his much larger friend Obelix.

Asterix's best friend and constant companion. As a baby, he fell into a cauldron of magic potion and it had a permanent effect on him. Because of that, he's absolutely huge, and always wants to drink more potion (though Getafix won't let him). He sells menhirs. 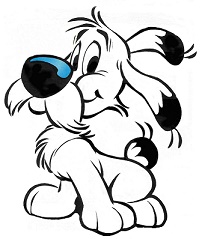 The elder and druid of the village. He is responsible for the creation of the magical potion that made the village invincible.

The chief of the village.

The Chief's Shieldbearers
Two Gauls whom Chief Vitalstatistix hires to carry him on his shield.
Cacofonix (Assurancetourix)

The village bard and school teacher, who is infamous for his bad singing voice. 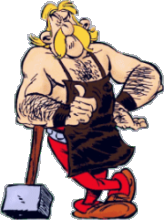 The blacksmith of the village.

The fisherman of the village, who also sells his fish (imported from Lutetia by ox cart, a two-week trip) in the market.

Vitalstatistix's wife, who proudly protects her status as the village's "first lady". 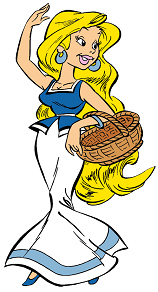 A beautiful villager. First introduced in Asterix the Legionary.

The leader of Rome, based on the Real Life person. A recurring villain of the series.

Crismus Bonus
The original commander of the Compendium garrisson, Crismus Bonus is the very first antagonist of the series, and harbored treasonous ideas to overthrow Caeasar with the help of the Gauls magic potion.
Inspector General Overanxious
The latest in a long line of high-ranking officials sent by Caeasar to conquer the village, Overanxious tries to simply keep the Gauls locked in their village with a blockade to keep their rebellious ideas from the rest of Gaul. When Asterix makes a bet that he and Obelix can escape the village and tour all of Gaul to gather regional food for a feast, Overanxious agrees, but secretly plots to keep the two from succeeding.
Torturus Convolvulus
A weedy, shady little Roman who has a gift for spreading disharmony and strife. The villain of Asterix and the Roman Agent, Caesar sends him to the village to make the inhabitants turn on each other.
Varius Flavus
The Roman governor of Condatum (modern-day Renne in France), who's been embezzling the taxes meant for Rome, sending only a small pittance while keeping almost everything else for himself or wasting it on lavish orgies. His attempts to deal with a Roman inspector sets off Asterix's quest to Switzerland.
Vexatius Sinusitus
A Roman Quaestor tasked by the Senate to go over the accounts of Governor Varius Flavus due to his suspiciously low tax revenue and his claims that the Renne region is too poor to provide any more for Rome. Unfortunately, Sunisitus underestimated the extremes Varius Flavus is willing to go to hide his corruption.
Squaronthehypotenus
A Roman architect who oversees the construction of The Mansions of the Gods, a large Roman-style apartment building, just outside the Gaulish village, with the intent of defeating the Gauls through cultural absorbtion instead of violence.
Tremensdelirious
A drunk legionary who kicks off the Caesar's Gift story. Having (technically) served in the Roman Legion for 20 years, he's due for retirement and a land deed as a reward, but due to idiotically bad-mouthing Ceasar the night before his release in a drunken stupor, he's gifted the Gaulish village as a kind of punishment.
Caius Preposterus
A Roman expert in Economics, who sets off the Obelix and Co. story: He proposes a plan to integrate the Gauls into the empire through capitalism since force isn't working, believing that once the villagers have been exposed to the economics of the wider world, they will join the empire on their own volition.
Gluteus Maximus and Gaius Veriambitius
An athletic Roman legionary and his commanding officer who serves as his coach, the two have been chosen to be part of the Roman squadron of the Greek Olympic games, only to despair when they find out that the Gauls also intend to take part.
M Devius Surreptitius and Dubbelosix
The head of the Roman empire's secret intelligence service, known as M.I.IV, and his top agent, Surreptitius and Dubbleosix are sent to sabotage Asterix and Obelix's mission to secure a supply of rock oil, the secret ingredient required for the Gauls magic potion.
Coronavirus
A chariot racer who always wears a helmet to conceal his face, Coronavirus is widely considered one of the greatest racers in the world, and participates in the cross-country race held by Senator Lactus Bifidus, to showcase the quality of Roman roads.

Vercingetorix
A Gaulish chieftain who united the warring Gaulish tribes in an attempt at opposing the Roman conquest, and did a better job of it than most who had tried before him, but was eventually defeated by Caesar at the historic battle of Alesia. Only appears in brief flashbacks, but his influence is still felt in the comics present day.
Justforkix Doubleheligos (Goudurix Doupleheligos) 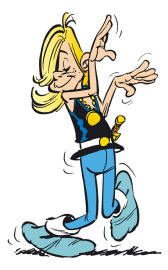 A trendy teenager and Vitalstatistix's nephew by way of his brother, Doublehelix.

Homeopathix
Impedimenta’s brother, who has made a fortune as a merchant and loves to flaunt his success.
Orthopaedix
An innkeeper who finds himself in possession of Caesar's gift from Tremensdelirius. He ends up getting into a political spat with Vitalstatistix that distracts them from Roman attacks until it's almost too late.
Angina
Orthopaedix's wife.
Bravura
A feminist who arrives to the Gaulish village to empower its female citizens.
Adrenalin (Adrénaline) 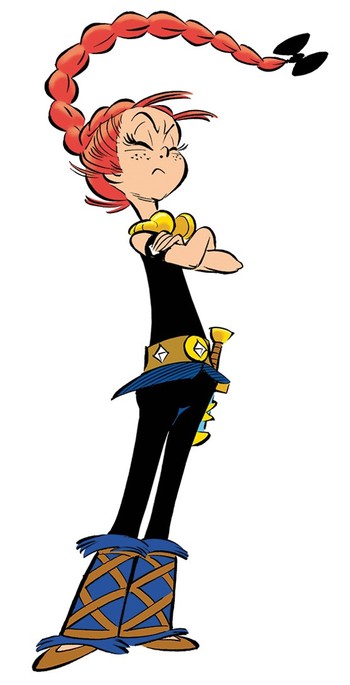 Vercingetorix's daughter. Before surrendering to Caesar at Alesia, her father sent her away with two of his lieutenants, Monolithix and Sidekix, in order to protect her. Because of Bindwatchflix's betrayal however, the Romans learned about her existence. They are now trying to find and capture her, both to use her as a hostage and to get their hands on her father's torc, which he gave to her and that could be used as a rallying symbol by the Gaulish resistance. 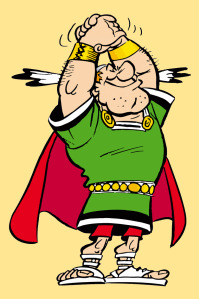 The chief of a neighbouring village, who has thrown his lot in with the Romans, and who Vitalstatistix has to fight in Asterix and the Big Fight.

Whosemoralsarelastix
A chief who rules a neighboring village next to the main village. He asks Vitalstatistix and Asterix to look after his village's savings, which kicks off the Cauldron story.
Prolix
A soothsayer who comes to the village. He easily fools them with his prophecies.
Bindwatchflix (Adictosérix)
A Gaulish traitor working for Caesar. Former tracker and scout for Vercingetorix, he felt unappreciated by his leader and now serves the Romans. He has been tasked with finding and capturing Adrenalin, Vercingetorix's daughter.

A crew of unlucky pirates who constantly get beaten senseless and have their ship sunk by the Gauls. An Affectionate Parody of the Barbe-Rouge series.

Ekonomikrisis
A Phoenician merchant that aids Asterix on a few occasions. 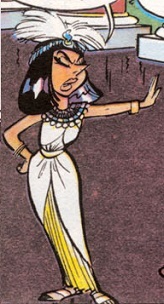 Voiced in French by: Pierre Tornade

The best architect in Alexandria... which isn't saying much. Edifis's ramshackle buildings are the joke of everyone not living in them. In spite of this, he's given the job of constructing the palace for Caesar in three months, or be fed to the sacred crocodiles. Luckily for him, he happens to be friends with Getafix, and manages to convince him to help with magic potion.

Edifis's rival in architecture. Artifis would like nothing more than see Edifis fed to the crocodiles, and works to sabotage the construction.

Caesarion (Ptolemy XV Caesar)
The infant son of Cleopatra and Caesar, and thus, the union of two of the most powerful dynasties of the ancient world... which unfortunetly also makes him a very prominent target.

note It is believed by linguists that Proto-Germanic was still spoken then. of the Germanic peoples (called Goths in the album).

Metric's interpreter, and later one of at least ten rival kuningōz.

Kuningaz of the Normans, he kidnaps Justforkix to learn the meaning of fear.

Hereendthelessen
A Danish explorer who sets off to find a new world, who crosses paths with Asterix and Obelix in the Great Crossing tale.
Odius Comparissen
Hereendthelessen's chief.

Watziznehm (Kiçah)
An Indian fakir who comes to the village asking for help to save his drought-dried kingdom.
Hoodunnit (Kiwoàlàh)
A scheming minister who seeks to take over his king's kingdom.

This section deals with original characters who appear in the animated films and not the comics themselves.
Abba
A brave Viking woman who appears in the Asterix and the Vikings film. In that feature she is Timandahaf's daughter, and Justforkix's love interest.
Sulfurix (Demonix)
A rival druid to Getafix.
Pectine
A smart and inventive young girl.

Alternative Title(s): The Twelve Tasks Of Asterix, Asterix Versus Caesar, Asterix In Britain