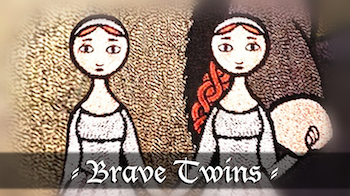 "We may fight and argue constantly, dear sister..."
"But I'll even break tradition if it prevents you from leaving me."
Advertisement:

is a Brave fanvid by TheNamelessDoll. The video uses the song "Níl Sé'n Lá" by Celtic Woman.

One twin is an ideal future queen—studious and regal—while the other skirts studying in preference of athletics. One day it's noted that the twins are old enough to marry. Erin's future husband will be chosen based off a series of challenges. Unwilling to be split from her sister, Merida decides to secretly take part of the games and win them so that her sister won't be married off.