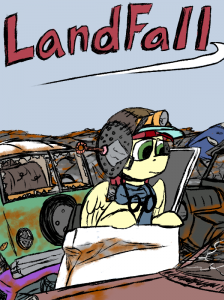 is an imageboard-based Interactive Comic that is inspired by My Little Pony: Friendship Is Magic. It is currently still ongoing, having begun on September 3, 2016. Potential readers should be warned that the story contains a notable amount of Mature content, particularly lewdness, despite its youthful protagonists.

A pegasus filly with a knack for finding things named Hidden Gem, and her best friend Dusty Miller, used to play around in the local landfill and pretend to have epic space adventures. But now, they must try to save their town from destruction after an actual space meteorite crashes into a nearby hill, which begins to make household objects come to life, and may possibly be driving ponies crazy. And this is just the first incident in what will be a world-spanning adventure...