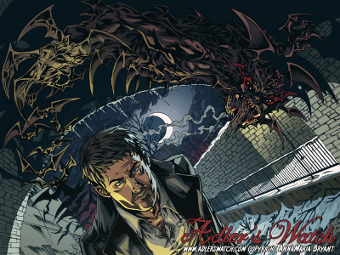 Adler's Watch is a Web Comic by Anna-Maria Bryant.

In Gay Nineties New York, Anthony Adler is a remorseful murderer on the run from the law. While collecting mementos from his mother, who was one of his victims, he is cornered by police officers and is about to be shot on sight when he opens a fob watch from the collection that suddenly teleports him to the future.

Meanwhile in 2011, Sammy Brandy and Marie "23", two struggling paranormal investigators based in Austin, Texas, are looking through an antique shop for a fob watch with "Adler" engraved on it. Upon finding such a watch, 23 opens it, and Adler suddenly teleports into the room. They conclude from 23's and Adler's physical similarities that the two are somehow related, despite Adler's protests that he has no family.

Soon after this abrupt meeting, Sam and 23 get a call from a man claiming to be under attack from a manticore. Adler decides to come help the girls, and in the ensuing brawl, it is discovered that Adler has become effectively unkillable as a side effect of the time travel.

Now stuck over a century from his own time, Adler must adjust to 21st-century life as he and the two girls puzzle out the mystery of his appearance and fight other paranormal creatures lurking about Austin.

The first page is here

, and the most recent page is here

. The comic updates every Tuesday and Friday, although due to author's rather poor health, the Schedule Slip is a regular feature.