Togo, official name the Togolese Republic (French: République togolaise) is one of Africa's smaller countries located in West Africa, just north of the Bight of Benin, and is bordered by Ghana, Benin, and Burkina Faso to the west, east, and north, respectively. Out of all four, Togo is probably the least-known by the general public, though history might beg a slight differ.

During and after their first voyage to Western Africa in the 16th century, the Portuguese built trading posts throughout the coast of the Gulf of Guinea. The region that would become Togo was part of the Slave Coast, i.e. The Place Where All Those Black Slaves In The Americas And Europe Originally Came From. Imperial Germany took control of the Togoville coastal port town and began their expansion inland, eventually establishing the Togoland colony, which also included the eastern part of present-day Ghana (the so-called "Volta Region"). Being surrounded by rivals at all sides (the British Gold Coast/Ghana to the west and the French Benin and Upper Volta to the east and north, respectively) made Germany conscious enough to vigorously build a deep infrastructure and network in the colony, setting a model for others to follow.

Togoland was transferred to the British and French after World War I as part of the League of Nations mandate. The two divided it into two, and when independence was due in the 1950s, British Togoland joined the newly-independent Ghana, while French Togoland remained a part of the French Union until it was granted independence in 1960.

Since then, Togo has experienced Africa's depressingly-usual repressive regime/dictatorships/human rights violation-laden leaders/countless coups, beginning with the paranoid first president Sylvanus Olympio, who feared his main opposition Nicolas Grunitzky so much he forced the latter to flee. He was assassinated and Grunitzky came to power in what would be the country's only multi-party election, before being deposed by the general who ordered Olympio's assassination: Gnassingbé Eyadéma. Eyadéma ruled the country with an iron fist, barring opposition from participating and maintaining power for from 1967 to 2005 or 38 years, which is officially the longest reign of any African president/dictator, period.note Yes, even Mugabe has been controlling Zimbabwe for "only" 29 years as of 2016. Mugabe being already senile as he is, it might not last long...And by the way, Gaddafi doesn't count, since he resigned his position to become an advisor...who controlled Libya in all but name. Between that time, he amazingly avoided all assassination attempts and plots to overthrow him with the West's staunch support since he was able to repel the communist revolution as had happened in neighboring Benin.

Indeed, Eyadéma's downfall happened only because nature itself willed him to: he died of a surprising heart attack in Tunisia while on a medical trip to France. Though the constitution provided for the head of the parliament to take over, the army blocked said head (who's outside the country in a state visit) and installed Eyadéma's son as his successor. The following elections ultimately confirmed said son, Faure Gnassingbé, as president, and thus Eyadéma's legacy continues...

In spite of the political problems, Togo is still quite the regional center for commerce, no small thanks to the high start in the infrastructure department brought over from the colonial period. It, however, still struggles from poverty and the fall of cocoa prices (which are the country's main export) in 1998.

Ewe people dominate Togo, although many other ethnic groups are well-represented. Also, the country is dominated by animists, which is surprising considering that its neighbors identify themselves with an Abrahamic religion, if only nominally. That's not to say Abrahamic religions don't get any popularity, though; Christians are a minority in the country's south, while Muslims can be found mainly in the north.

Football is the country's main sport. One player from the country, Emmanuel Adebayor, has received international attention and praise over the years as Togo's top goalscorer, as well as being a part of England's Crystal Palace. 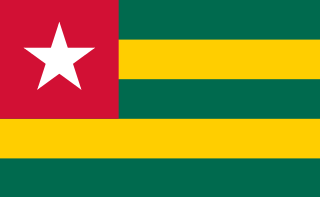 The flag uses the pan-African colors as used by Ethiopia (i.e. green, yellow, and red), but models itself after the flag of Liberia with its alternating stripes and a rectangle at its canton, which is itself modeled after the flag of the United States. The green represents the forests and agriculture, the yellow represents the soil, and the red represents the blood spilled by those who struggled for the country's independence. The white star, again an allusion to Liberia's flag, represents light and intelligence. The flag was designed by Paul Ahyi, a celebrated artist of Togolese origin who studied in France before designing the flag.