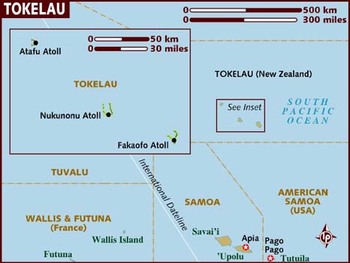 A dependent territory of New Zealand (though it is officially referred to as a nation by both the New Zealand government and the Tokelauan government), Tokelau is an island territory in the South Pacific Ocean north of the Samoas consisting of three tropical coral atolls: Atafu in the northwest, Fakaofo in the southeast and Nukunonu in the center. While having the smallest economy in the world and the fourth smallest population of any sovereign state or dependency on Earth, the territory is notable for being the first 100% solar powered nation in the world and a leader in renewable energy. Unfortunately, though, the islands are only two metres (6.6 feet) above high water of ordinary tides, which means they are particularly vulnerable to the rising sea levels caused by the effects of climate change.

Note that this territory doesn't have a capital. Each atoll has its own administrative center, though the largest city is Atafu.

Besides being wholly reliant on solar power, Tokelau is perhaps best known for the .tk domain name, which is free for the most part, though users may not host anything illegal or risqué on sites using it. While the free domain proved to be an effective publicity stunt and contributed to Tokelau's GDP, it was also an easy avenue for abuse as spammers and scammers took advantage of it, smearing the .tk domain's reputation somewhat. 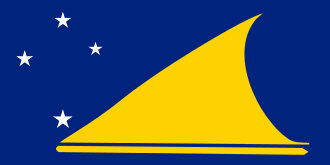 The flag is a blue field with a depiction of a yellow Tokelauan canoe sailing towards the manu (Southern Cross). The canoe symbolizes Tokelau’s journey towards finding the best governance structure for its people; the Southern Cross symbolizes a navigational aid for the journey. The Southern Cross has helped Tokelauan fishermen navigate the waters around Tokelau for centuries while they have fished to sustain families and villages with its riches. The white stars of the Southern Cross are a symbol of Christianity, an important part of everyday life in Tokelau, and white also signifies the cooperation and unity among the atolls of Tokelau and a shared aspiration to secure a better life for Tokelauans. The yellow of the canoe signifies a happy, peaceful community, while the blue field signifies the ocean on which Tokelauans depend for their livelihood and is also the colour of the sky which holds the stars that direct Tokelau’s people.