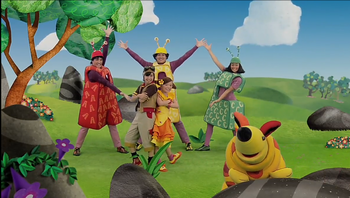 El Jardín de Clarilú (English: Clarilú's Garden) is a pre-school targeted series on the Latin American Disney Junior Channel, being one of the first shows created regionally for Latin America. The show features a little girl named Clarilú who solves several mysteries taking place on her garden along with her best friend Lapiz, a pencil-dog. The show follows a Strictly Formula where Clarilú gets a letter from one of her friends at the beginning of the episode, which encourages her to find a lost object and figure out who sent the letter. The series attempts to blend in animation techniques with live-action segments, immersing the actors and puppets into an animated world.