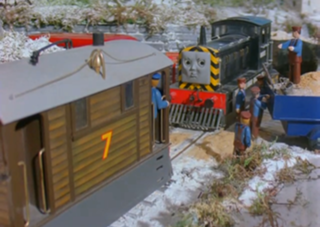 Mavis is a young Diesel engine who works in the quarry at the end of the branch line, where she shunts trucks and puts them in their proper place. She has sideplates like Toby to help prevent accidents on the line, but she is quite inexperienced and has her own ideas on how to do things; ideas she is very keen to implement. As a result, she puts the trucks in different positions every day making things hard for Toby, who tells Mavis off for this. Mavis, however, thinks Toby is just being fussy and boring and continues to do things her way until eventually Toby gives up and tells her she can take her own trucks to the station. Mavis is very pleased with this, as taking trucks makes her feel important.

Later, Diesel oils up to Mavis, who complains about Toby. Diesel sees a chance to cause trouble and tells Mavis that Diesels are naturally better than steam engines before leaving. Mavis takes his words to heart, not realising that Diesel knew nothing about trucks.

The line Toby uses crosses a main road behind the station before reaching a farm lane. Here, there is a dip in the line which can be very difficult to ride across in frosty weather. Toby had found a solution to this; after the fireman stopped the traffic on the road, Toby took a run at the dip and used the weight of the trucks to carry him across without trouble. Not only is it the easiest way, but it is also the only safe way to travel the lane. Toby tells Mavis about the farm lane and how to cross it, but Mavis thinks that Toby is just being fussy and ignores his advice.

Later, Mavis begins taking the trucks to the station not realising that the trucks, who were tired of being bumped around, planned to make her day difficult. Mavis reaches the farm lane, however, instead of stopping before the dip, she stops just before the road. All the traffic is halted and Mavis, who believes she has got one over on Toby, tries to leave. But the trucks take advantage of her mistake and hold back. Mavis is unable to move despite her best attempts. Mavis' crew tries to dig away the frozen mud, to no avail. Mavis is stuck, making everyone who is caught in the resulting traffic jam cross.

Back at the yard, Toby is angry when he is told what has happened. Toby's driver tries to calm him down, reminding him that Mavis is young and needs to learn. Toby is not interested and is willing to let her manage the trucks herself. The driver reminds Toby that they are actually his trucks and Mavis is technically not allowed to leave the yard. Knowing the Fat Controller might be angry if he finds out about this, Toby decides to go and help after all.

Back at the lane, Mavis is facing the anger of a farmer when Toby arrives to help. After a lot of pushing, Toby finally starts to move Mavis and the trucks back across the lane. This makes Toby's fire burn fiercely and his fireman uses the ashes to melt the frozen mud. Finally Toby and Mavis wind up at the beginning of the lane and Toby wishes Mavis goodbye and leaves. Mavis is left feeling very angry and embarrassed, and after taking the trucks to the shed, she quickly sneaks back to the quarry.