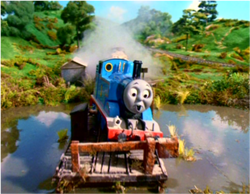 Thomas finds out that Bertie is upset that the railway failed to deliver tar to mend the bumpy roads. Thomas assures that he will find the solution to the problem. Meanwhile, James is complaining about having to shunt trucks while Percy is away at the harbor, but Gordon advises him to pretend to be sick, so he does so. Thomas agreed to take James' trucks, but the trucks, as usual, decide to play some tricks...