Adapted from: Duck and the Diesel Engine, "Pop Goes the Diesel" 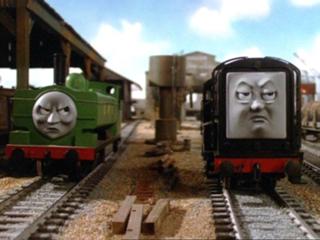 Duck is proud of being a Great Western engine and talks endlessly about it, but works hard too and makes everything go like clockwork. Since Duck came around, things on The Fat Controller's railway are going well; the coaches and trucks behave well and the passengers have stopped grumbling. However, the big engines are irritated with Duck's boasting about his Great Western heritage.

Soon, a new engine named Diesel arrives to the Island of Sodor. Duck is ordered by The Fat Controller to teach him what he can do in the yard since he is given a trial. Diesel introduces himself to the engines, and Gordon, Henry and James ware flattered by his polite manners, but Duck doesn't take a liking to Diesel's oily nature.

As Duck and Diesel arrive to the yard, Duck's dislike of him is mutual as he firmly orders him to refer The Fat Controller as "Sir Topham Hatt". Diesel smugly tells him that he doesn't have to be told what to do and that diesels know everything and that diesels always come to a yard and improve them; diesels are revolutionary. Duck, who doesn't correctly pronounce "revolutionary", orders him to collect his trucks as he shunts Gordon's Express train. Eager to show off, Diesel goes to work.

When Duck returns, Diesel is trying to take some trucks on a siding. The trucks are old, empty and haven't been touched for a long time. This gives Diesel a difficult time in pulling them. Duck is eager to see how this would go. A frustrated Diesel begins to get rough with the trucks; he gives a great heave, causing some of their brakes to snap and their gears to be jammed. Diesel tries moving them back, but they don't move.

Duck arrives with the other trucks Diesel arranged and thanks him for arranging it. Diesel asks if he wanted the old ones, but Duck declines. Flustered about this, Diesel asks Duck why didn't he tell him about it, but Duck tells him that he never asked and reminds him that he was too busy trying to show off what diesels can do. Duck leaves happily while Diesel growls with disgust.

Later, Diesel reluctantly helps the workman to clear up the mess while the troublesome trucks laugh and sing at him. As the mess is cleared, Diesel goes to sulk in the shed very angry with the trucks and Duck.

Tropes are waiting in the yard... (YMMV here):