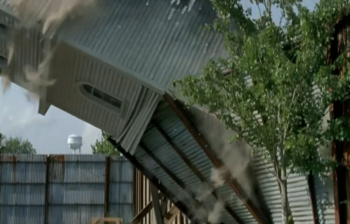 In a flashback, Nicholas commits suicide, bringing Glenn down with him as they fall from the dumpster into the waiting herd below. Glenn finds himself pinned down by Nicholas' body, and while the walkers are distracted, Glenn desperately drags himself underneath the dumpster, saving his life. A day passes and the herd finally moves on. Glenn weakly crawls out from under the dumpster, desperately thirsty. He finds a water bottle thrown at him by Enid, who's on a nearby roof. When Glenn asks what she's doing here, she turns tail and flees. After putting down the now reanimated David, Glenn tracks down Enid and forces her to return to Alexandria with him.

Rick speaks to Maggie about their situation, assuring her that Glenn and the others will be back soon. Later, while on his way to help train Ron, Rick coldly tears down a sign Gabriel had just posted inviting Alexandria to a prayer circle, much to Carl's disgust. Gabriel is submissive, but replaces the sign when Rick leaves. Rick and Carl train Ron, but Rick refuses to let Ron train with live ammo. Having nothing but a repulsive grimace towards Carl for the whole lesson, Ron distracts Olivia and steals some ammo from the armory.

Rick, Carol and Michonne meet with Morgan, as Carol has told Rick that he allowed some Wolves to live and escape Alexandria - the same that nearly killed Rick. Morgan admits it, and says he is confused, since his good deeds and "all life is precious" mantra have led to massive death and destruction.

Rick discusses a plan with Michonne to have their group lure the herd away with some cars, and Michonne presses him to include the native Alexandrians. Rick refuses, only trusting his own group, and Michonne chastises him, as they are all on the same team. Deanna presents the two with plans for Alexandria's expansion that she had drawn up, feeling optimistic about the future.

Rick decides to try fortifying the wall, and is eventually joined by Tobin, whose greater knowledge of construction work is appreciated by Rick. Tobin admits that he and the other Alexandrians were scared of Rick when he came to town, but he personally sees the good in Rick and what he is trying to do, and asks Rick to not give up on them. Rick considers this, and thanks Tobin for his support, and the two continue to work on the wall. However, they are suddenly interrupted when they see Spencer trying to shimmy over the herd in order to try to lure the herd away from town. The grappling hook Spencer has used as a zip line fails, and Spencer comes precariously close to getting eaten. Rick, Tobin, Michonne, Morgan, and Tara spring into action and are eventually able to save Spencer. Rick angrily berates Tara for going out of her way to save Spencer, as she's already almost died once for "these people". Tara responds by flipping him the bird. Rick rips into Spencer for his harebrained scheme, but Spencer points out that Rick wouldn't have listened to any plan he'd have presented.

Morgan later asks Denise for help with infected wounds, and helps her himself when she lacks confidence in her abilities. She follows him to the basement where he is keeping the Alpha Wolf. Carol notices, and leaves Judith with Jessie. Before she leaves, the still-traumatized Sam asks if killing people makes someone a monster. Carol has little patience for Sam and disagrees, clearly annoyed. She eventually confronts Morgan and demands to know who he's hiding.

Meanwhile, Ron is walking around with his handgun at Rick's instruction... but is following Carl with his hand on his gun.

Glenn and Enid release several green balloons, having reached Alexandria. Maggie ecstatically realizes that Glenn is alive, and the Alexandrians look on and see it as a sign of hope.

Then the watch tower collapses, bringing down a chunk of the walls with it, and allowing the herd to enter Alexandria at last.