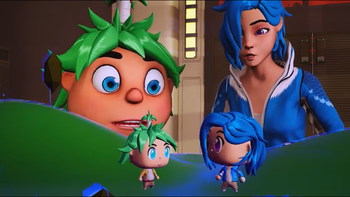 ”It’s time to get to work.”
Tari and MD-5 plan their attack on TAS-Corp using some... interesting methods. Meanwhile, Belle discovers some shocking evidence about Project Blue.
Advertisement:

After attempting to send Theo back into an Ultra Jump Mania cartridge only to be ejected, Tari and MD-5 realize that Theo has to be sent back to his original cartridge, which, unfortunately is currently in the hands of Lucks and TASCorp. Masa sees this as an opportunity to launch MD-5’s greatest plan against TASCorp: Operation Silent Demon. Demonstrated by Sofia using adorable chibi holograms, the plan goes as such; During an underground gaming tournament, enact an extremely-precise Game-Breaking Bug to crash the game and TASCorp's servers, allowing Sofia to get past their security and hack into a private server, collecting any incriminating info that would bring down the company, while also sending a forged order to bring Theo’s cartridge to MD-5... which Masa thinks may now be able to be pulled off thanks to Tari’s abilities. Meanwhile, Belle learns about Dr. Sheridan and his mysterious Project Blue... and comes to a shocking revelation.