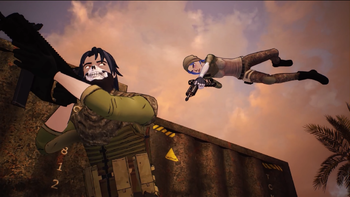 ♫Only living this battle I blaze...♫
Tari battles her way through an FPS game to prove herself to the new mysterious group that call themselves MD-5.
After their rescue by Lamar in the last episode, Tari and Theo find themselves in the company of MD-5, a trio consisting of Lamar, tech girl Sofia, and their leader Masa, with one goal in mind: bringing down Lucks and TASCorp. MD-5 reveals how they decided to rescue them after inadvertently witnessing Tari’s abilities in action while spying for info at the Speedrunner Arena. Now, in order to prove herself to Masa, Tari must duke it out with him in the shooter game Battle Blaze... which initially proves difficult for Tari since she’s never dealt with a human opponent before. Meanwhile, Lucks, finding something familiar about the symbol on Tari’s shirt, sends Belle to investigate an abandoned lab within TASCorp that he thinks might have answers...