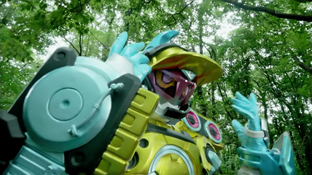 Emu, Asuna and Hiiro go back to the college that the Gekitotsu Bugster attacked last episode, theorizing that the person that contracted the Game Disease is there. They're soon proved right, as after a quarrel with her boyfriend, a girl named Youko falls over and shows symptoms of Bugster infection. Hiiro forcefully causes the Bugster to manifest, revealing that it's Collabros holding another one of the 5 stolen Gashats - the DoReMiFa Beat!However, before they can properly deal with him, Graphite and Snipe both show up. Barring Level 3 Ex-Aid, the emerald Bugster trounces around the Doctor Riders, but is soon assisted by Genm, allowing the villains to escape.

After the battle, an enraged Hiiro confronts Taiga about Graphite and their connection to five years ago, furiously proclaiming that he "could've saved Saki"! The tragic backstory that gave birth to the bitter rivalry between Brave and Snipe unfolds...