Recap / Kamen Rider Ex-Aid Ep. 7: The Reason for Some Lies! 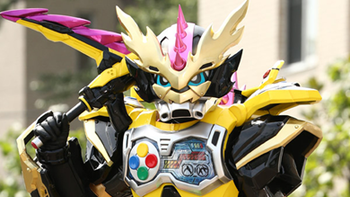 Kiriya runs through a corridor, gasping for air. Finally, he runs into one of the rooms, finding there a corpse prepared for the wake. He removes the veil and then falls on his knees, screaming...

... And then promptly wakes up in a hospital bed, still recovering from the injuries he sustained during the clash with Genm. But the rekonwalescent has to be put on hold, for his roommate, an old factory owner, has an attack after an argument with his daughter. Turns out to be another person infected by the Bugster virus. Truly, no rest for the wicked.

However, the CR does not trust him prohibit him from interfering with the Bugster business. However, when it turns out the man is infected with two strains of the Bugster virus, each one of them holding the remaining Level 3 Gashats! With Kiriya promising that there will be no lies from now on, will Emu be able put his trust in the coroner once again?