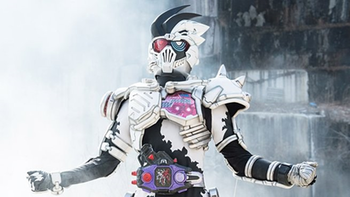 The fun has just begun!

At a prison, Detective Heiji Uesugi is attempting to speak with the prisoner Masamune Dan, but Masamune walks out; the detective starts suffering from game illness symptoms. Meanwhile in CR, Emu is exhausted from Hiiro's supervision of his surgery internship, Hiiro commenting that fighting Bugsters seems to be all Emu is good for; on that note, Poppy reveals that it was actually Kuroto who had suggested she seek out "Genius Gamer M" to recruit into CR. They get an emergency call and go to the prison, diagnosing Heiji as having the game illness; instead of following them back to CR, however, he insists to see Masamune again (Asuna tells Emu that Masamune is Kuroto's father and the one who caused Zero Day), but his illness breaks out, the Kaiden Bugster taking him over. Emu and Hiiro transform into Ex-Aid Double Action Gamer Level X and Brave Hunter Quest Gamer Level 5 Full Dragon and Stage Select to the woods; Kaiden challenges them to a sword fight, the Riders using the Gashacon Key Slasher and Dragon Blade. Genm Zombie Gamer Level X appears, but instead attacks an arriving Snipe Simulation Gamer Level 50 to retrieve the Gashat Gear Dual β. Brave uses Drago Knight Critical Strike while Ex-Aid uses Mighty Double Critical Strike, but Kaiden deflects several of the hits and is only weakened to the point of retreating back inside the patient. Snipe and Genm target each other with Bang Bang Critical Fire and Arrow Mode Bang Bang Critical Finish, but Snipe's Level 50 attack overwhelms Genm's Level 10 defense and launches the Bang Bang Shooting Gashat back to Snipe; Genm revives and retreats. Kuroto stumbles back to his hideout, saying that reviving one more time should give him enough death data to awaken the true "Level X", plugging in Dangerous Zombie to charge with something.

Back at CR, Heiji insists he's fine and tries leaving, but collapses out of the patient bed. He reveals that the Bugster virus killed his son on Zero Day five years ago and he's been investigating the event ever since; Masamune has admitted some responsibility, but never elaborates on how the Bugster virus came about. He also notes that both Kiriya Kujo, who visited Masamune, and Kuroto Dan, his son, are missing. Emu vows to help investigate to find out why Kiriya was killed, and though Hiiro says that isn't a doctor's job, he leaves with Asuna anyway. Meanwhile, Nico is celebrating Taiga's retrieval of Bang Bang Shooting; Taiga has an idea on how to beat Dangerous Zombie's immortality. Emu and Asuna meet with Masamune to learn what he told Kiriya, but are surprised when he asks them to stop his son. Taiga and Nico go to Genm Corp. to bribe Tsukuru into making them a new Gashat, one of a game where the player kills an immortal zombie.

On their way back to CR, Emu and Asuna are met by Kuroto. Emu reveals what Masamune had said, that the Bugster virus was born from the Y2K fiasco seventeen years prior; additionally, Kuroto had caused Zero Day and blamed his own father. At CR, Hiiro asks Heiji if looking into the past is worth it, remembering Saki; however, thinking about his failure to solve Zero Day makes Heiji's infection flare, and Kaiden emerges again, Hiiro transforming. Kuroto blocks Emu's attempt to leave, the two transforming to fight. Brave Level 5 Full Dragon duels Kaiden as Ex-Aid Double Action Gamer Level XX faces Genm in a quarry, but an arriving Snipe Level 50 is intercepted by Para-DX Fighter Gamer Level 50 eager to fight. As the fights continue, Para-DX switches to Puzzle Gamer Level 50, nabbing an Iron-Body and two Muscular Energy Items for a Perfect Critical Combo, but is intercepted by Bang Bang Critical Fire and both Riders are knocked out of their transformations, Parado noting Snipe's superior experience and warning that Genm plans to surpass Levels entirely. Ex-Aid's Level XX halves hit Genm with a Gun Mode Action Robots Critical Finish, knocking him out of his transformation as Brave defeats Kaiden with a Muscular Energy Item and Drago Knight Critical Strike, curing and freeing Heiji; Kaiden's debris are collected by Kuroto with the Gashacon Bugvisor. The Riders untransform and Heiji hides as Kuroto explains the "ultimate game", Kamen Rider Chronicle: a life or death survival game where civilians are turned into Riders to fight Bugsters. He proclaims that this game will bring excitement to unsatisfied people, and compares his talent at making this to that of the gods. Emu vows to settle this for Heiji's son, Saki, and Kiriya, but Kuroto transforms again, this time with a giant explosion of purple clouds and lightning. Hiiro explains that "X" is the unknown variable, making Genm's power incalculable. Emu transforms to Ex-Aid Level XX again, hitting Genm with an Axe Mode and then a Blade Mode Mighty Brothers Critical Finish, but Genm fires to intercept the second attack and vanishes.

At CR again, Heiji is confirmed clean of the Bugster virus and vows to find Kuroto's hideout to stop him once and for all. Watching, Poppy admires Emu's devotion to past patients lost as well as current ones, Hiiro agreeing before Poppy steals a bite from his cake. As Heiji climbs out of the patient bed, however, he slips and falls again.