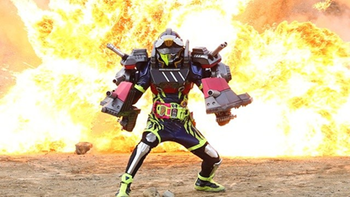 I, the remodeled Snipe, will not lose to newcomers. Here I go!

Nico has tricked Taiga to an amusement park claiming a Bugster patient, and discovered in a haunted house that he's afraid of ghosts; however, they find a student showing game illness symptoms. On the Seito University Hospital roof, Hiiro triggers the Taddle Quest Gashat, but the threat doesn't make the Bugster inside Emu surface; Hiiro insists he's only helping to preserve his perfect record. Emu begins to fear himself as they get Taiga's call. Parad has returned to Kuroto's hideout; he's intrigued by Brave's Level 50 form and wants to fight it.

As they arrive, Taiga tells Hiiro and Emu that the infection is from Jet Combat, but Nico mocks Daisuke's timidity, spurring his infection to flare and the Vernier Bugster to overtake his body. Over Taiga's warning, Hiiro transforms into Brave Fantasy Gamer Level 50; he summons a group of Bugster Virus monks and attacks Vernier, but Emu is too fearful of his Bugster side taking over again to transform. Brave beats the Bugster into submission, Vernier pulling back inside the patient, before turning to challenge the watching Parado. Parado transforms into Para-DX Puzzle Gamer Level 50, using Perfect Puzzle's power to make Brave's Virus monks simply vanish before backing into a Stretch Energy Item, deforming to avoid slices from the Gashacon Sword; Brave uses Taddle Fantasy's Demon Lord's power to neutralize this ability and keeps attacking. Para-DX uses a pair of Recover Energy Items to replenish his energy, switching to Para-DX Fighter Gamer Level 50, but Brave suddenly freezes up and goes weak, Para-DX stopping his attack as he sees Brave hasn't mastered the Level 50 Gashat Gear Dual β, turning and leaving. Hiiro's transformation undoes itself and he collapses, Taiga grabbing the Gashat Gear Dual β.

At CR, Emu relays his fear of losing control to Asuna. Meeting with the patient, Daisuke Egami, they learn that a girl in his class set up a date for them at an amusement park, but he was ashamed at unsuccessfully trying to overcome his fear of the thrill rides ahead of time so as to not disappoint her. Asuna's response is to drag him to the amusement park again and put him through the wringer of rides; the experience drains both Daisuke and Emu. Hiiro awakens in Taiga's clinic.

Poppy and Emu discover that even the Ferris Wheel is too much for Daisuke; overhearing some passing women mocking him on this, his infection flares again, Vernier taking over and choosing his target as the girl Daisuke has the date with. Getting the call, Hiiro tries to respond but can't stand up, Taiga saying he'll deal with the Bugster using the Gashat Gear Dual β's other game, Bang Bang Simulations; Hiiro refuses, still blaming Taiga for letting Saki die on Zero Day. Vernier's form emerges again, targeting Emu and Poppy with a barrage of missiles, but Emu is still too afraid to use Mighty Brothers XX. However, Kuroto Stage Selects them to an empty quarry, saying that Emu's fear has made him no longer a threat; he transforms into Genm Zombie Gamer Level X to retrieve Emu's Gashats, but Taiga arrives and draws Genm's attention. Hiiro had let him leave; he believes that a single mistake can end a doctor's career, and Taiga pointed out that Hiiro could easily make such a mistake in his condition, but Taiga himself has nothing more to lose, and as "the only Kamen Rider needed" could bear all of the responsibility the others can't risk. Genm reminds him of the side effects of his prior usage of the Proto Gashats, but Taiga says he can handle this and transforms into Snipe Simulation Gamer Level 50, fighting through the initial power surge. Vernier summons a swarm of small gray Combat Gamers to attack Emu and Poppy, but Snipe shoots them down with the cannons on his armor. Emu reaches for his dropped Mighty Brothers XX Gashat, but hesitates again; Snipe tells him to leave if he won't fight, but Emu remembers Hiiro's first attempt to snap him out of his Bugster attitude and realizes why he'll stay and fight despite the risk: he's a doctor. Emu transforms into Ex-Aid Double Action Gamer Level XX and his two halves attack Genm. Snipe intercepts Vernier, shooting and destroying him with the Bang Bang Critical Fire, curing and freeing Daisuke. Ex-Aid Level XX Orange, meanwhile, uses the Gashacon Key Slasher and activates the Mighty Brothers Critical Finish for the two of them, hitting Genm with a double energy slash, but Genm only uses this as cover to collect Vernier's debris with the Gashacon Bugvisor before disappearing.

Daisuke vows to overcome his fears in time for the date, prompting Poppy to drag him off to "help" again; Emu repeats his motivations to Taiga before getting dragged off by Poppy as well. Kuroto stumbles back to his hideout to find Parado telling him to get back to working on Kamen Rider Chronicle; Kuroto instead reveals that Dangerous Zombie's Level X (Level 10) power doubles as "X" representing the unknown variable.