Literature / We Hunt The Flame 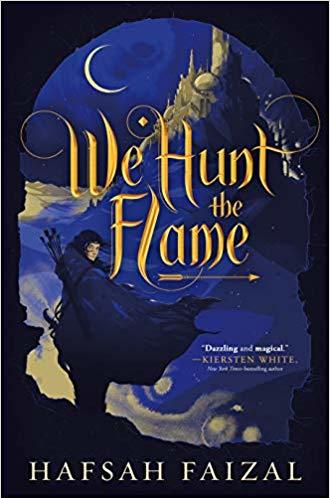 Ages ago, the land of Arawiya was peaceful, bountiful, and filled with magic. The land was protected by the Six Sisters of Old, who used their magic to maintain peace and prosperity. Then one day, they vanished, and seemingly took magic with them. At the same time, a nigh-lifeless desert almost none are able to safely traverse emerged and began slowly overtaking the land.

In the sisters' absence, the Caliphates over the land grow unstable. The people suffer and starve, men fight for power, and a few Caliphs have used the disappearance and seeming failure of the sisters to justify laws repressing the rights of women.

Amidst this chaos, there is Zafira, a huntress able to traverse the Arz and hunt in its sands. Her people lived because she killed, but she pretends to be a man in order to avoid earning the ire of the Caliph. Because she can traverse the Arz she is recruited to lead journey into its center and find a magic artifact that may be able to restore magic to the land. Meanwhile, Prince Nasir is better known as the Prince of Death, made to assassinate his cruel father's enemies. His father has given Nasir a new assignment: Follow the Hunter into the Arz, kill him once he's found the artifact, and bring it to the Sultan.

We Hunt the Flame is a YA fantasy novel, the first in the Sands of Arawiya series, released in 2019, written by Hafsa Faizal. The book takes heavy inspiration from Arabian culture and folklore and was published to rave reviews, with even acclaimed fantasy author Brandon Sanderson following Faizal on twitter. The sequel, We Free the Stars is was released in January 2021.