Literature / The Wheel of Darkness 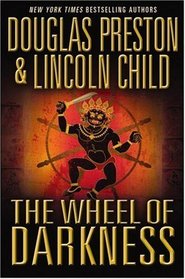 The Wheel of Darkness is a novel by Douglas Preston and Lincoln Child first published in 2007. It is part of their informal Agent Pendergast series.
Advertisement:

After her ordeal at the hands of Diogenes in Book of the Dead, Pendergast takes Constance on a world tour to introduce her into the modern world and hopefully heal her wounds. They end their journey at a Tibetan monastery, where Constance is schooled in the same meditation techniques Pendergast has mastered. While there, the monks reveal a devastating loss of an ancient artifact designed to cleanse the world of humanity's evils. They implore Pendergast to retrieve it and return it to their protection. Pendergast tracks the artifact to the maiden voyage of the ocean liner Britannia, where it's evils are released on four thousand people trapped in the middle of the Atlantic Ocean.