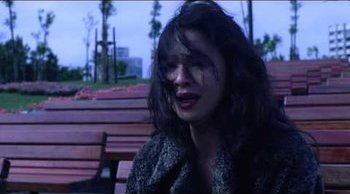 Vive L'Amour is a 1994 Taiwanese film by Tsai Ming-liang. It is dedicated to three down on their luck people in the modern Taipei. They all cannot be happy as the urban malaise has stricken them hard.

A female real estate agent, May Lin, and two males, a hetero street peddler, Ah-Jung, and a gay ossuary salesman, Hsiao-Kang, roam the streets of Taipei. They all meet in an appartment which a real estate agent tries to sell without any success. May Lin herself brings Ah-Jung to the appartment to make love with him while Hsiao-Kang finds the way on his own. Both men steal the keys and now have access to the appartment where they sometimes live.

The film is made in the manner resembling that of Michelangelo Antonioni only even slower. Each scene is protracted. The characters move slowly, they are mostly silent, very few conversations happen.

The movie earned a great success for Tsai Ming-liang as it won him a Leone d'Oro on the Venice festival of the same year.