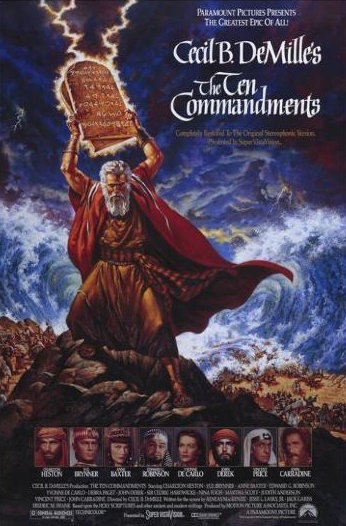 "Thus sayeth the Lord God of Israel: Let my people go!"
"So let it be written. So let it be done."
— Rameses

The last of the great Cecil B. DeMille epics, and a remake of his own 1923 silent film of the same name, this 1956 film from Paramount tells the biblical story of Moses and the Exodus.

You know the basic tale — or if you don't, you need either to see this or read the source material. Moses hears the voice of God while out in the wilderness. It ages him about forty years — hey, the film may be long, but to keep the cast of characters constant, the time in which it takes place is compressed. Moses goes to Rameses to tell him that God wants him to let His people go, or else. "Or else" happens.

The Ten Commandments won one Academy Award for its special effects, and was nominated for six others, including Best Picture. The majestic score was written by Elmer Bernstein as his first major film project.

The silent film, which served as the basis for this remake, became Public Domain in the United States effective 2019 (it was already PD in most other countries by then).

The dedicated and curious might want to compare this with The Prince of Egypt and Exodus: Gods and Kings. The source material is the same (though this film might've been distilled through an extra novel), but the directions taken with it are very different.

So it was written...so shall it be done.
Feedback

Typical depiction of Egyptian monuments being built by slaves

Typical depiction of Egyptian monuments being built by slaves