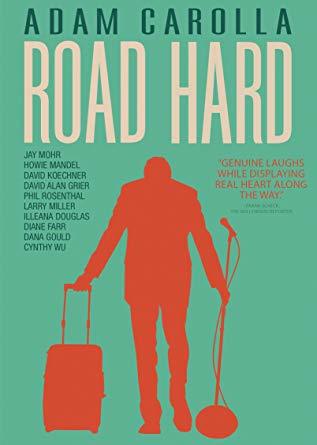 Road Hard is an independent romantic comedy co-written, produced and starring Adam Carolla, released in 2015. Bruce Madsen, a stand-up comedian who achieved big success in the nineties, finds work in television, film and radio drying up, much to do with his refusal to "play ball" in Hollywood. Now, living in the guest house of his ex-wife and her boyfriend's place (that he bought), he's paying for a mortage, alimony, and has his daughter's college tuition on the horizon. Bruce is forced to return to the road after a decade away, dealing with small to middle-sized stand-up gigs across the country, as well as his fall from stardom. Meanwhile his former partner has gone on to host a successful late night talk show and two of his best friends in comedy have successful gigs lined up, all of which depress him.

The movie follows him to several stand-up gigs and many attempts to get back in show biz and off the road. Additionally, he starts a romance with a woman he met while on the road, all while dealing with his daughter's upcoming move to college.

The movie was crowd funded by Adam's fans (following the incredibly difficult process Adam had to deal with getting his previous movie The Hammer made and funded) through Fund Anything. The story is based on the many stories Adam has heard from his comedian friends, as well as his own experiences. There are several bit-parts and cameos played by these same comedians (some As Himself).