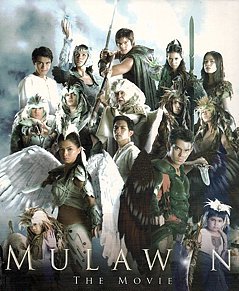 Nope, there aren't any Ravenas on this photograph.

Following the events take directly took place after this movie's prequel, the Sugo Heroes Agiluz and Alwina decided to stay on the Mortal World after their marriage, and proceed to pack their things on their ship on their journey. However, a thunderstorm took place, and separated Agiluz and Alwina into separate places: Agiluz into the hands of a humble farming couple, and Alwina into Gabriel's very hands. At the same time, the realm of Encantadia has been breached by the traitorous Pirena, serving as Ravenum's henchman, and everyone fights... again... for the safety of the Gintong Binhi and Agiluz' and Alwina's Ugat-Paks.

Mulawin: The Movie is a Philippine live-action film sequel to the first titular series entry, created by Don Michael Perez, co-directed by Dominic Zapata and Mark Reyes, and licensed under GMA Network. A previous main series entry to the Mulawin saga, which in turn branches into Iglot and the Encantadia spin-offs, it visions the events that took place between Mulawin and Mulawin vs. Ravena.