Film / I Can Hardly Wait 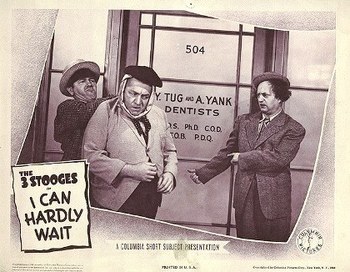 "I'm not afraid, I'm not afraid. What a liar I am."
I Can Hardly Wait is the 73rd short subject starring American slapstick comedy team The Three Stooges, released August 13, 1943. In it, the stooges, who are defense workers, break into someone's house late at night and raid their refrigerator for food. After several cooking antics they finally sit down and eat, and Curly breaks his tooth on a ham bone. Moe suggests they go to sleep, and after several mishaps with a three-tiered bunk bed, Curly dozes off. The rest of the episode takes place in Curly's dream, where Moe and Larry try several tricks to remove Curly's tooth before taking him to the dentist.